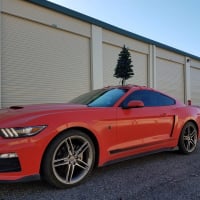 Orkocean CARegistered User, Daily Operations Certified, Advanced Operations Certified, Administrator Certified, myHub Certified ✭✭✭✭✭
April 2019 in Miscellaneous Discussions
I'm shocked to see the forums have been a little slow as usually when I come in on Wednesday after being off my two days I see quite a few new posts to catch up on but today there wasn't much so I figured why not post something that would get some debates and stir the pot up

Please be civil to everyone and respect their opinions as everyone is entitled to their own.  Now on to a interesting hypothetical i've always pondered, especially after a manager chased someone at 4am on his property last week. If anyone has real world stories regarding this and how it turned out i'd be interested in hearing them.

As a resident manager you live where you work, most of us i'm sure have our facility address on our drivers license if you've been at the site long enough. Now let's say you are a person who owns guns and you catch a thief in the night on property and your intention is to call the cops and hold them at gunpoint until the cops arrive to arrest them. Maybe they have a weapon and threaten you or actually try to harm you and a shooting occurs on site. Does the fact you live on site qualify the same as if you were a home owner and shot someone breaking in to your house?
-1