StorageForum
Sign In · Register
Home› Starting Out in Self-Storage 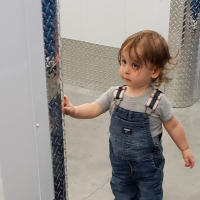 What's your best Auction story?  Can be humorous, inspiring, or weird.

I have quite a few, but this last one was interesting.

We had our last auction a few months ago. One woman was desperately trying to avoid having her unit auctioned, but was unable to settle or follow a payment plan with us (we tried REALLY hard to avoid the sale)

Anyway, the day arrives, and just as the sale starts the woman calls. "I sent my friend down there with Cash to settle up and stop the auction!!"  I tell her its happening right now, but that I'll make sure the auctioneer goes to her unit last to buy her some time. About 30 minutes later, nobody shows up with money, and auctions over.

Turns out her friend DID actually show up with the cash, but thought he would "just bid for the unit, get it super cheap, and pocket the rest! everybody wins!"

He lost the unit to another bidder, and got to explain to the lady in our parking lot when she arrived about 10 minutes later.

last I saw she was jumping up and down on his cars hood screaming as he was trying to leave; cops arrived shortly.