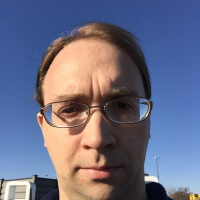 JamesStorage MORegistered User ✭✭✭
February 2019 in Opinion
I'm sure we've all seen a few zingers. My personal best so far was the warlock. He wanted a unit he could cook his "brews" in. When I told him we don't allow open flames in the unit, he cursed me with some kind of dried claw thing. Later found out he's known to the police in the area for being a general troublemaker, and for trying to hypnotize money out of people.
2